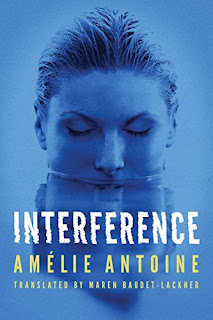 After reading The Art Forger in just under two days on my new Kindle Paperwhite, I really felt on a reading roll. Suddenly I wanted to read everything.

Having dipped into contemporary fiction, I decided to keep the momentum with that line of literature. Moreover I decided to momentary forgo any thought of doing research historical fiction on the Harriman project for the moment, but to read whatever might occur to me, no matter what the subject, so long as it wasn't a 50 Shades rip-off like Alpha Billionaire or Filthy Boss. My test is generally: can I say the title outloud in a straight face without adopting a lurid accent?

It turns out that the Kindle device is always ready with suggestions, and I had signed up for a month's free trial of Kindle Unlimited, which allows one to "borrow" books for a set monthly price, I decided to go with the flow and grab whatever was at the top of the list, in pot luck fashion.

The book that Kindle thought I would like was Interference by Amélie Antoine. It turns out that it's a translation from the French.

As I mentioned, there no history here. It is completely contemporary in setting and subject. Nevertheless it was a good read, and rewarding in many ways.

The story is ostensibly about three characters, a man and two women. Almost the entire book revolves around them. Each chapter alternates in following each of them, or being narrated by one of the two women.

The narrative begins with a young French couple living on the coast of Brittany. At the beginning of the story, the wife goes swimming. She narrates her own drowning. Then we follow her husband as he discovers that she is dead. We also continue with narration from the wife as she sees her husband grieving in the home. In this way, it sort of feels like the movie The Sixth Sense, and other "beyond the grave" type of stories.

Soon we meet a second young woman (the third character of the story). Initially she is single and lives in Paris, but she quickly relocates to the village in Brittany. It is obvious from the start that she and the husband of the drowned woman will meet. We follow their slow progression in finding each other, all under the creepy observation and narration of the drowned wife, who watches her husband fall in love with new woman over time, even as he mourns for his wife.

For much of the story, the book feels like a thoughtful elaboration of grief and recovery from loss of a loved one, mingled with a imagined ghost story. We are left with the mystery of why we are hearing the dead woman's observations? Are they being imagined by the husband in his grief, for example?

Now here's the kicker. I'll try to avoid spoilers, but I have to mention that before I began  eading the story, I had read the top-rated review on Amazon which stated, with a warning, that there is a "huge plot twist" in the story that completely changes the way one feels about the characters. The review did not reveal what the twist was.

But  knowing this, I read through most of the book wondering when this plot twist would occur and how it would change how I felt about the three characters. When the plot twist finally came, it was obvious. Kindle tells you exactly how far you are through the book, percentage wise, and it turns out the plot twist is revealed at exactly the 66% mark, or in other words, at precisely 2/3 of the way through the story.

Indeed the plot twist utterly changes almost everything about the story and how one feels about two of the three main characters. I didn't see it coming at all and got a laugh out of it when it was revealed. At first I was a bit irked by it, and felt it might well ruin the book altogether, but soon I thought it was a good plot twist and enjoyed the drastic switch in the theme of the story.

At once, after the twist, the story took on a new dimension of social commentary about our time, and the defects of contemporary society and Pop Culture. Moreover we experience the pervasiveness of the American version of it (the characters are constantly referencing something American, even before the twist). It's hard to say more about this without revealing what the plot twist is.

Moreover, I should add that I found both of the female characters to be utterly refreshing compared to the vacuous heroines of contemporary American chick-lit. Both of them were three-dimensional women, with character flaws and emotions that allowed a traction of interest in them, even if they were not exactly sympathetic as "good people" at all times.

It plays into the idea that the French are more sophisticated than Americans in understanding male-female relationships, and the female psyche in general. From my experience, they see no need to play into the childish American "you-go-girl-ism" that is so pervasive here, especially in our Pop Culture, by which everything a woman/heroine does must be some cast as a form of validation and empowerment of women in general (or proof of repression by men).

In short, there seemed no way that Interference could have been written by most American authors, male or female. The examination of women is too complex, even for a book that wasn't itself particularly deep, and which read very quickly.

As it happened, I devoured the book in less than twenty-four hours, but without skimming at all. I had a smile on my face at the end, and would consider reading more by the same author. It felt like a triumph to "return" it to the Kindle Unlimited library.